In yet another post, we looked at the Sabbath day connection and were
left with the following question: “How is it possible for the women to
buy the spices AFTER the Sabbath (Mark 16:1) AND prepare the spices
BEFORE the Sabbath (Luke 23:56)?

And in yet anther post, we looked at the buying and preparing of the
spices as a clue to the chronology of events between the death and resurrection of Jesus.

And in one more post, we looked at how Jesus in His death, burial and resurrection fulfilled the first three Feasts of Jehovah; the Feast of Passover, the Feast of Unleavened Bread, and the Feast of Firstfruits.

If you have not done so, I recommend that you review the Three Days and Three Nights: According to the Scriptures before continuing.

If you have not done so, I recommend that you review the Three Days and Three Nights: The Women Hold the Key before continuing.

If you have not done so, I recommend that you review the Three Days and Three Nights: A Spicy Solution before continuing.

If you have not done so, I recommend that you review the Three Days and Three Nights: Every Jot and Tittle before continuing.

The Time of Jesus’ Burial

The Gospel accounts are clear that Jesus was buried in the evening at the time of the setting sun. This corresponds to the moment when the Jewish calendar went from the 14th to the 15th. View the study on the Day According to Genesis 1:5 for more details on this concept (link pending). In a literal sense, after Jesus expired (died) at 3pm on the 14th, he was buried at 6pm on the 14th literally at the start of the 15th (which was a Sabbath high day).

The Moment of Jesus’ Resurrection

As the Scriptures teach us, Jesus had already risen prior to the women going to the tomb in the early morning. Additionally, the earthquake was not to let Jesus “out” of the tomb but rather to let people see “into” the tomb. Jesus did not need the rock to be moved in order for Him to rise from the dead, but the people certainly needed the rock to be moved in order to be able to see that Jesus had risen from the dead.

Let us consider again the three statements: “the third day”, “after three days”, “three days and three nights”. These three different statements must mesh, otherwise the Scriptures contradict themselves. Let’s look at them one by one. 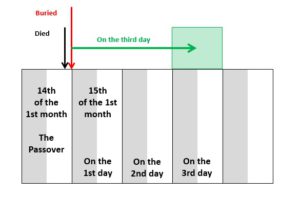 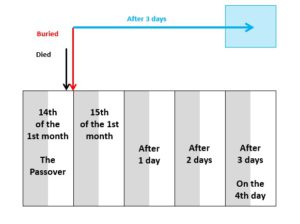 When we combine the two charts, there seems to be a contradiction. Remember that both statements MUST be true. 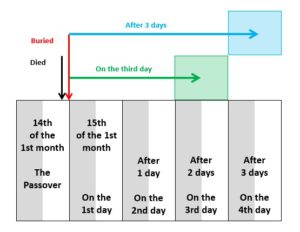 The only moment of time that makes both statements true is the moment of transition from the one day to the other. Literally, the time of the setting sun on the Sabbath day, the moment when the first day of the week was about to start. 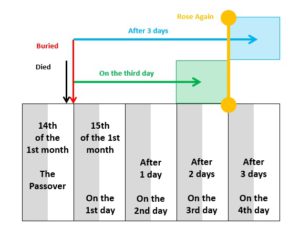 The Day of Jesus Death

As you try to assimilate all this information, take a deep breath. The Scriptures are loaded with information, but by searching them, we find out that God has given us more than enough to find out these precious realities.

The resurrection of Jesus Christ is spoken of as God’s seal of approval for the work Christ did on the cross to save sinners. I would suggest that the exact fulfillment of the sign of the prophet Jonah serves as a great big exclamation mark.

Why does any of it matter?

But why can mankind believe God and take Him at His word?, because God is in the details. A careful study of Scripture will reveal an amazing message written to man from His Creator. All kinds of “Easter Eggs” are hidden in plain sight in the Scriptures to be found by those who take the time to look. Clues left by the Creator so that we would know without a doubt that He was communicating to us.

Search the Scriptures, find the gems, share the treasure is the theme of this website. These events surrounding the death, burial, and resurrection of Jesus Christ are just that. They are a hidden treasure that serves to confirm the authenticity of the author of the Scriptures as the Creator of all.

Redeemed “with the precious blood of Christ, as of a lamb without blemish and without spot: Who verily was foreordained before the foundation of the world, but was manifest in these last times for you, Who by him do believe in God, that raised him up from the dead, and gave him glory; that your faith and hope might be in God.” 1 Peter 3:19 – 21.