Following the spices will lead us to a very practical and simple solution to the three days and three nights between the burial and resurrection of Jesus, and there really is nothing spicy about it. Although, I must say, resolving the apparent contradictions in the gospel accounts is quite a savory proposition.

In yet another post we looked at the Sabbath day connection and were left with the following question: “How is it possible for the women to buy the spices AFTER the Sabbath (Mark 16:1) AND prepare the spices BEFORE the Sabbath (Luke 23:56)?

If you have not already done so, I recommend that you review the Three Days and Three Nights: According to the Scriptures before continuing.

If you have not already done so, I recommend that you review the Three Days and Three Nights: The Women Hold the Key before continuing.

Lining Up from the Right

When looking at the Luke 23 passage, we note that the women went to the tomb on the first day of the week. They brought with them the spices that they had prepared. We also note that that women had rested the Sabbath day after preparing the spices.

Using the visit of the women to the tomb as an anchor point in the timeline, and following the sequence of events in Luke 23, we find that the women… 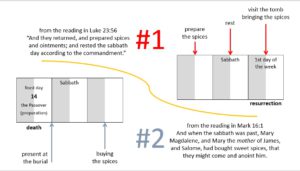 Lining Up from the Left

When looking at the Mark 16 passage, we note that the women left the tomb after the burial and rested the Sabbath day. After resting that day, they went to buy the spices.

Using the presence of the women at the burial as an anchor point in the timeline, and following the sequence of events in Mark 16, we find that the women…

As we considered in the post called Three Days and Three Nights: The Women Hold the Key, using the Sabbath day as the common ground for the two scenarios produces a problem in logic.

If we combine the two scenarios and use the buying and preparing of the spices as the common day, we encounter the following sequence:

Not only is this scenario plausible, it also easily addresses the issue of the three days and three nights.

And There They Are: Three Days and Three Nights

When Jesus gave the wicked and adulterous generation the sign of the prophet Jonah, He didn’t give them a vague, hard to understand sign. He gave them, what I would consider, the most direct, and easy to understand sign they could have received.

When Jesus spoke, He emphasized the three days and three nights part of the story. That, in and of itself, should for us, place emphasis on this aspect of the sign. When we look at the sequence of events with regards to the women buying and preparing the spices, we notice that between His burial and His resurrection, there are three days. No partial days, no accommodation of tradition, but a literal three days.

No gymnastics and no contortions, just three days. I will leave you to ponder this. In a subsequent post called Three Days and Three Nights: Every Jot and Tittle, I will look at what this means with regards to the day of the week that corresponds to the crucifixion of Jesus Christ and also look at pinpointing the moment of His resurrection.

10 thoughts on “Three Days and Three Nights: A Spicy Solution”