A small group of friends is sitting together having casual conversation. Suddenly someone jumps up and asks… “What time is it?” Now, I would like for you to consider how each person in the group might respond. And before you continue, the actual time is 3:17 pm.

I think that you would agree with me that we would probably hear any or all of the following statements:

Are any of these statements what we would consider “wrong”? In actuality, we are used to hearing any and all of these types of statements when the question “What time is it?” is asked. And we would be satisfied with any of the answers given.

How accurate are the statements? Obviously some are more accurate than others but, all of them convey the sense of the actual time being 3:17 pm.

When studying the Scriptures, why would we expect anything different from the people who lived in Bible times, where no one had a watch, nor a cellphone with which to confirm the actual time of day?

It is unrealistic to place on the Bible authors a more stringent accuracy requirement than what we actually live with on a day to day basis.

The History of Telling Time

We live in an era where telling time has taken on a whole new meaning in accuracy. The technology that has been developed allows for sporting competitions to be measured to within 1 / 100th of a second. The clocks of computers and cellphones are tied into network clocks. Practically speaking, clocks from around the world can be synchronized to within a second of each other.

Interestingly enough, one of the oldest methods of telling time is through what is known as an astronomical clock

which uses the celestial bodies to maintain it’s accuracy. Is this yet another of the Creator Clues left for mankind? Genesis 1:14 states “And God said, Let there be lights in the firmament of the heaven to divide the day from the night; and let them be for signs, and for seasons, and for days, and years:” Are the sun, moon and stars the “mechanisms” of God’s clock visible for all to see?

In the previous post called God’s 24 Hour Day: Details of the Day and Night we noticed that the night watches were divided into four separate phases:

Why do the authors speak in such general terms?

Simply, they do it for the same reason that we do it. We don’t always have a clock on hand to check what time it is, and for most of us, our sense of time is not that accurate. For example, if you wake up some time during the night, are you able to determine exactly what time it is without looking at a clock? Not likely, but if you are able to look outside, you might be able to narrow it down to sometime in the “middle of the night” or to “almost morning” depending on how dark it is outside.

The fact that the authors convey the information about time of day in the same manner that we would, gives an authentic feel to the stories. If the authors had said that Jesus appeared to the disciples at 4:20 am, I would be very suspect of the authenticity of the account. 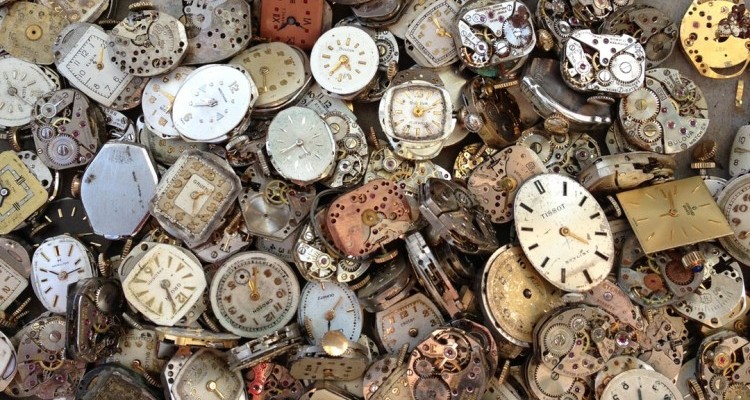 God’s 24 Hour Day: Understanding the Hours of the Day

In the previous post called God’s 24 Hour Day: Details of the Day and Night we noticed that the hours of the day were divided into four separate phases:

So when we read the accounts of the trial and the crucifixion of Jesus Christ there appears to be a contradiction.

In John 19:14 we read “And it was the preparation of the Passover, and about the sixth hour: and he saith unto the Jews, Behold your King!” indicating that the time Jesus was delivered to be crucified as 12 noon (the sixth hour).

Before moving on, I would like to remind you of the “3:17 pm” analogy we presented at the beginning of this post, and in particular this statement:

Are any of these statements what we would consider “wrong”? In actuality, we are used to hearing any and all of these types of statements when the question “What time is it?” is asked. And we would be satisfied with any of the answers given.

So how to we reconcile the third hour and the sixth hour conflict?

Let’s start with the easy one: “it was the third hour, and they crucified him”. So what time of day was Jesus crucified? If we look at he summary above, we note that the third hour corresponds to 9 am. But did he really?

If I speak to you of 10 o’clock, what time period comes to mind? Most would agree that the time between 10:00 and 10:59 corresponds to 10 o’clock. If we apply that same thought process to the third hour (9 am), we would understand that any time from 9:00 am to 11:59 am would correspond to it. Jesus could have been crucified anytime between 9 am and 11:59 am and Mark would not be wrong in what he stated. 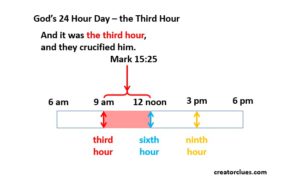 The more difficult one “and about the sixth hour: and he saith unto the Jews, Behold your King!”. So at what time of day did Pilate give Jesus over to be crucified? Was it 12 o’clock as corresponds to the sixth hour? Or was it between 12:00 noon and 2:59 pm following our previous analysis? Either one of these two situations would not resolve the apparent contradiction.

When we understand the word “about”, solving this puzzle is not all that difficult. The keyword “about” means an approximation, or in our way of speaking “more or less”. Most would agree that if someone tells you that it is more or less 10 am, it could generally mean anything from 10:30 am to 11:30 am.

If we apply the same thought process to about the sixth hour (12 noon), we would understand that any time from 10:30 am to 1:30 pm would correspond to it. Jesus would have been delivered to the Jews anytime between 10:30 am and 1:30 pm and John would not be wrong in what he stated. 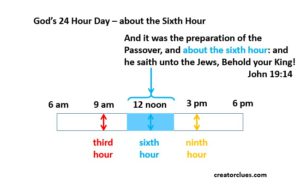 When combining these two apparently contradictory statements, we can see that there is an overlap. This overlap actually helps us to pinpoint the time of the crucifixion of Jesus Christ to within an hour and a half. In order for both statements to be true, Jesus would have been delivered some time after 10:30 am and crucified some time before 12 noon. This gives more than enough time for them to take Jesus from Pilate’s judgment hall to Golgotha (located outside the walls of the city, but in 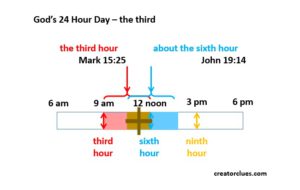 While some people may look at the inaccuracy of time telling as a
problem, I look at it as confirmation that the Spirit of God inspired
the writers to write what they wrote. Even the supposed contradictions
come together to provide some accurate information. This is especially
true when looking at the time of the crucifixion, the time of death and
the time of the resurrection of Jesus Christ.

Action Point: God’s 24 Hour Day and the Accuracy of Time

To read the first part of this series click here: God’s 24 Hour Day According to Genesis 1:5

To read the second part of this series click here: God’s 24 Hour Day According to Genesis 1:5